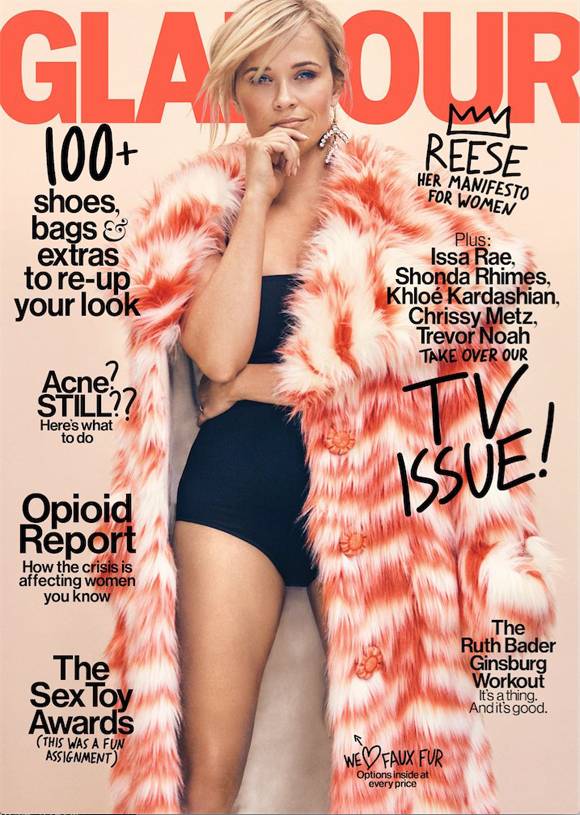 Reese Witherspoon refuses to take no for an answer!

In the October issue of Glamour, the Home Again actress appears on the cover, and writes an essay for the publication about tackling issues of sexism and racism in Hollywood.

The 41-year-old remembers what it was like 15 years ago where she would audition for a sole female part against a room full of aspiring actresses.

“I remember, 15 years ago, being a young actress and starting to audition for movies in L.A. There were always a lot of young women waiting in the green room for their shot at the one part there was for a girl in any given movie. Because that’s all there was—one part. As I got some of those parts, I would arrive on set to realize I was the only girl with a speaking part. There were also no women in the crew: Maybe a girl or two in the wardrobe department, but no one in any other department. I was literally surrounded by 150 men. I remember thinking it was odd that women made up half the population but such small percentages of roles in Hollywood, on and off the screen.”

It’s even harder for women of color to break into the industry. When talking to friend and A Wrinkle in Time costar Mindy Kaling, Witherspoon realized that artists — especially minorities — have to create their own opportunities, or risk not working.

“Another thing I think about a lot is how it feels to be a minority woman in America, so rarely seeing yourself onscreen, and it’s unconscionable. When I asked Mindy Kaling, ‘Don’t you ever get exhausted by always having to create your own roles?’ she said, ‘Reese, I’ve never had anything that I didn’t create for myself.’ I thought, Wow, I feel like a jerk for asking that; I used to have parts that just showed up for me. I can’t imagine how hard it is to write your own parts and simultaneously have to change people’s perceptions of what a woman of color is in today’s society.”‘

Although this mistreatment really gets Reese “angry,” it also motivates her to work harder and better than any man she knows!

“You can complain about these things. You can get stuck in the emotion of it—and sometimes I do, and I get really angry. I’ll get pissed off and stomp around the house. The anger comes from such a deep, real place for me. But my mother always said to me, ‘If you want something done, do it yourself.”‘

With her production company, Pacific Standard, and her new multimedia company, Hello Sunshine, the thespian is hopeful for the future.

“It’s been exciting for me to watch women in my business secure some major wins: Watching Felicity Jones play a great female protagonist in Rogue One felt phenomenal (and the film made over $1 billion at the global box office). Patty Jenkins and Gal Gadot powered Wonder Woman to tremendous box office success—those are the kinds of movies I wanted to see as a little girl. Stories with powerful women at the center.”

Reese is a woman and you WILL hear her roar!