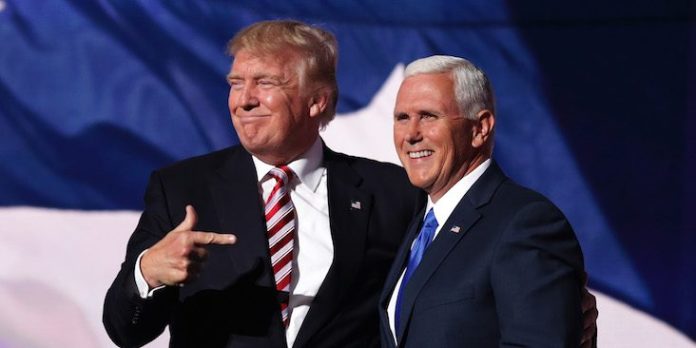 As investigations into Russian meddling creep along, every new development has social media buzzing about whether President Donald Trump might get impeached. And maybe it’ll happen, maybe it won’t. But if Trump impeached, and Mike Pence steps up into the Oval Office, it leaves a big hole in the lineup. So, what then? If Trump is impeached, who becomes vice president?

Well, whoever Pence wants. The 25th Amendment to the Constitution, the same amendment that places the VP as officially second in line of succession if the president is killed or incapacitated, states that the veep gets to replace himself, more or less. It reads (emphasis added),

1. In case of the removal of the President from office or of his death or resignation, the Vice President shall become President.

2. Whenever there is a vacancy in the office of the Vice President, the President shall nominate a Vice President who shall take office upon confirmation by a majority vote of both Houses of Congress.

So if the VP becomes the P, he gets to choose his own successor (pending confirmation from Congress). Technically, the next in the line of succession to the presidency after the vice president is the Speaker of the House of Representatives, who is currently Paul Ryan. So he’s the man who would take over the Oval Office should something happen to both Trump and Pence.

There are some weird precedents when it comes to appointing a new vice president, though.

After the assassination of John F. Kennedy in 1963, the event which led to the creation of the 25th Amendment in 1967, Kennedy’s successor, Lyndon B. Johnson didn’t have a second in charge, as the succession to the presidency hadn’t been formally laid out. If Johnson had been incapacitated or forced to step down, the presidency would have skipped right over the empty vice presidential seat and gone straight to then-Speaker of the House, John McCormack. (Johnson did eventually get a VP though. After he won reelection in 1964, his running mate, Hubert H. Humphrey, became vice president.)

And then in the 1970s the soap-opera-esque levels of drama and corruption around the Nixon administration led to two vice presidential change-outs. In 1973, VP Spiro Agnew pleaded no contest to a charge of tax evasion and stepped down from office. Then-President Richard Nixon replaced him with Gerald Ford, who then became president himself when Nixon himself had to resign after the Watergate scandal in 1974. When Ford took over the presidency, he nominated former New York Gov. Nelson Rockefeller as his own Vice President.

So who might Pence pick if he takes over the presidency? Well, let’s not put the cart before the horse. Let’s see how all this Russia business plays out, then we can start worrying about the rest of the presidential succession.