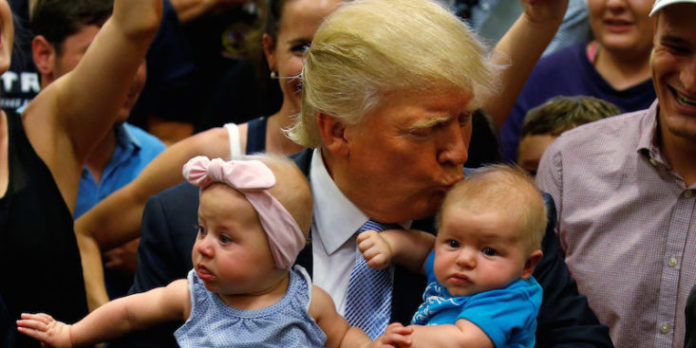 Weve learned a lot about Donald Trump over the past few months.

Since the moment he was inaugurated as president, the public has gotten a sharper inside look at a man who was already in the public eye for much of his life.

Gather all these reports together and you practically have a list of tips for working with President Trump.

Oh, by the way, theres a funny thing about those tips: If you really want to have a laugh, you could definitely make a comparison between those tipsand the types of advice youd get for working with toddlers.

And waddya know, its the weekend, and we want to have a laugh.

See if you canfigure out which is which.

For Trump or toddler? Afteryou serve vegetables, providesome ice cream but make sure they get one more scoop than the adults.

A Time magazine report published this past week noted the waiters at the White House already know to give President Trump an extra scoop of ice cream after dinner.

At the dessert course, he gets two scoops of vanilla ice cream with his chocolate cream pie, instead of the single scoop for everyone else.

Time also added that Pences preferences are catered to.

The tastes of Pence are also tended to. Instead of the pie, he gets a fruit plate.

For Trump or toddler? Compliment good behavior and accomplishments.

Trick question, this ones for both.

In an article for ABC News, Yales Dr.Alan Kazdin suggested a tip for dealing with defiant children.

Notice good behavior and give attention to it. Anything you see that you want to happen more often let the child know you like it

Meanwhile, foreign officials were advised to compliment Trump on his Electoral College victory during his upcoming trip to the Middle East, according to the New York Times.

For Trump or toddler? When they throw tantrums, just weather the storm and show that you are not rattled by it.

This is another tip for toddlers from Kazdin, who wrote,

Your goal in a tantrum is to get past it. Stay calm yourself and your child will calm down faster.

For Trump or toddler? Talk toother adults who interact with them, and instruct those adults to not tell too many fictional stories, so as to not dramatically alterworld views.

A report from Politico on Monday detailed how White House aides have a habit of slipping false news stories in front of the president, which can sometimes cause him to react angrily.

The opening line of the report read,

For Trump or toddler? When they are new to a setting, assume they know nothing.

According to the New York Times, foreign officials were told to not assume he knows the history of the country or its major points of contention.

For Trump or toddler? Find clever ways to sneak in vital information while theyre enjoying entertainment.

This, too, is a piece of advice from WeAreTeachers, which suggest using games to teach kids things youd like them to remember, like their classmates names.

For Trump or toddler? Keep lessons short their attention span may only last a few minutes.

Nato officials were advised to keep their speeches to four minutes at the upcoming summit to ensure that Trump will pay attention for the whole thing, according to theTimes of London.

For Trump or toddler? When upsetting news is being reported on the television, its best to not allow them to watch.

In a story for which the Washington Post interviewed12 White House aides, the paper reported that the president was in a happy mood during inauguration weekend until he turned on the TV and saw protests.

Over the objections of his aides and advisers who urged him to focus on policy and the broader goals of his presidency the new president issued a decree: He wanted a fiery public response, and he wanted it to come from his press secretary.

For Trump or toddler? When they misbehave, step away and leave them isolated.

This is one is actually not about President Trump. It is, in fact, a piece of advice on how to deal with misbehaving kids from child behavior specialist Betsy Brown, who wrote in the Huffington Post,

Remove and isolate your child to a safe place away from you and the scene. No words.

For Trump or toddler? Informative television programs can be used to explain what makes some behavior bad.

On Tuesday, conservative writer E.W. Erickson wrote that he knows one of the sources who snitched on Trump and told the media outlets that the president revealed classified information to Russia.

Erickson, whos usually critical of the media, said that the leak happened all because, essentially, the president is hard-headed.

So some of the sources are left with no other option but to go to the media, leak the story, and hope that the intense blowback gives the President a swift kick in the butt. Perhaps then he will recognize he screwed up.

For Trump or toddler? To present complicated information, keep them engaged by repeatedly calling their name and using pictures.

Yup, this one is for the president, too.

The London Times reports that foreign leaders will rely on tactics used at the White House to keep Trump engaged during his trip this week, which includes using maps, graphs, andthe presidents name frequently.