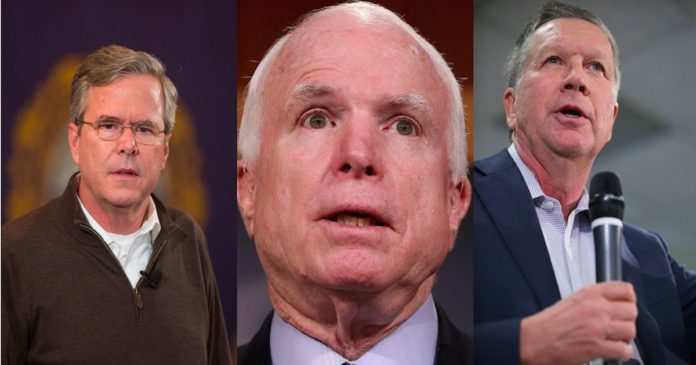 Over the past few weeks, Donald Trump has been bleeding support from GOP officials but that doesn’t mean they’re voting for Hillary Clinton.

Ana Navarro, a GOP strategist and commentator for CNN, spent the past week berating Trump as a “a flat out racist,” before telling voters she’d be voting for her mom. Arnold Schwarzenegger claimed he didn’t know he know who’d be voting for, and John McCain withdrew his support, while proudly announcing that he wouldn’t be voting for Clinton.

SEE ALSO: Muslims throw Trumps’ answer back in his face in the most clever way

Everyone’s vote matters, but both Navarro and John McCain come from battleground states where their votes statistically, at least, matter more. Even though traditionally conservative media outlets have called Trump “dangerous” and GOP leaders have warned that he’s a “security risk,” these leaders can’t simply muster the strength to put a stop it by casting one vote on behalf of the only candidate popular enough to stop him.

It’s hard, but here are some helpful tips for tortured GOP defectors who just, “can’t bring themselves to vote for Hillary Clinton.”

1. If you can’t bring yourself, have someone else bring you. Uber is a great option for folks who live in major cities.

3. Think of the apocalypse some of you have literally warned will come if Donald Trump is president, and then vote for the candidate who will not set the world on fire.

4. Remember the career you built telling people that “voting is important” and then actually cast a vote that matters

5. Drag your grieving, lifeless body out of bed, pack up your belongings, say goodbye to your friends and family, then head over to your nearest polling place to vote for Clinton and come back home five minutes later.

6. Do what millions of Americans do plan to do that day: vote without whining.

7. Use all of the muscles in your body to lift up that weightless pen and do the bare minimum required this election cycle.

9. Contact a licensed therapist and have them coach you through the trauma of “coloring in the other party’s circle, one time in your life.”

10. Remember the 30 years you spent telling your voters how much you loved to “reach across the aisle” and then, actually do it.