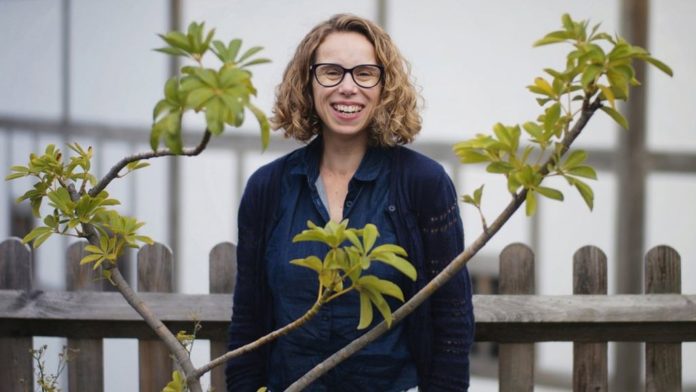 There was a whole lot of drama at the Globe in 2016, and not just on the stage.

Emma Rice became the venue’s artistic director last January, only to announce her departure nine months later after a series of disputes with the board.

Speaking from the stage at the Globe theatre, she spoke about Rice’s tenure, gender-blind casting and her own lack of theatre directing experience.

Here are six things she told us about her vision for the venue.

1. She won’t be directing any plays

When Terry was appointed, some critics pointed out that she had zero directing experience. But it turns out that this isn’t going to be a problem.

“I’m not going to direct [any plays], so nobody needs to worry about that,” she says. “I think it’s a skill that I don’t have, I think it’s a particular skill, and my passion is acting.”

So much so, that Terry plans to take to the stage herself pretty soon.

“Being part of an ensemble is part of my first season’s plans, and it’s really important to me that I am part of that ensemble.

“I think for me that’s what creates the best Shakespeare, collaboration in this space with the artists, with the audience, that’s where you get the meaning making, that you’re in a collective imaginative space.”

2. The Globe will be gender-blind

Forthcoming productions at the Globe will have equal roles for men and women.

“The whole season will be 50/50, and that’s not just small parts played by women or men,” Terry says.

“Across the season, the body of work will have equal amounts for male, female, it will be gender blind, race blind, disability blind.

“I have benefitted from that being a possibility. When I played Henry V [last summer], we had Brexit, the Chilcot inquiry, Theresa May as prime minister – these are all things that serve that play, and me being a woman was the last thing on people’s minds. So I know it works.

“And also, Shakespeare didn’t worry about gender – he had men playing women – so I don’t know why we have to worry about it.”

3. There’s no feud with Emma Rice

Have the outgoing and incoming directors had any contact?

“We’ve met. I met her as part of the application process, we’ve had cups of tea,” Terry says.

“Most people that work in theatre are freelancers, nobody is part of the building, we all sort of move on. So it really is a community venture, so there’s never any… people will talk about there being competition but for me it’s a collaborative process.”

She adds: “You know Emma’s work, if you’ve seen Kneehigh [the theatre in Cornwall that Rice was the artistic director of] you know what she does.

“So part of that was going, ‘Does that work in here?’ And the decision was made, in whatever way that came about, ‘No’, and now I am part of the new experiment, and I hope I last,” she says, joking: “I’ll see you at Christmas.”

4. The venue will be back to basics

One of Rice’s most controversial decisions was to use artificial lights and sound amplification.

But purists preferred the traditional unplugged nature of the venue, and Terry confirmed that the decision to use no more amplified sound was made before she got the job.

“The decision has already been made – there will be no amplified sound, no imposed lighting rig, and for me that’s what I knew,” she says.

“I haven’t worked here under Emma’s tenure, so what I know is this space as a raw naked space, and I suppose for me it’s less about what was added on, but what was missed when you have that.

“What you want to do is reach out and touch the hands of those people. I think it’s that direct connection with the audience.”

5. She wants to get more children interested in Shakespeare

Terry has a clear idea about how to get children enthused about Shakespeare from a young age.

“By experiencing it,” she says simply.

“It’s so experiential here… no kid in Shakespeare’s time would’ve been made to sit down and read. They’re plays.

“They make much more sense when you’re on your feet reading them, interacting, and it’s the same for the audience. So the more opportunity we can give to kids to experience that, the better.

“And also, teachers were taught badly, so they’re frightened of teaching it. So enabling teachers to experience it and giving them a different offering about what they could do with kids in the classroom [is important].”

6. She’s hopeful for the future

We’d all be pretty happy to land our dream job without even having to download the application form – but it seems Michelle’s appointment kind of happened by accident.

“Weirdly, I didn’t apply for this job,” she says.

Terry recalls the time when the job was advertised and conversations were being had across the theatre world about the Globe’s future.

“Everyone that works here in my experience has wanted to come back. So there are a lot of people, me included, [who were] saying, ‘I would love to be part of the artistic conversation’.

“So I wrote a letter to Neil [Constable, Globe chief executive] sort of pledging my allegiance, going ‘I’d love to be part of that artistic conversation’, and he wrote back asking if I’d like to convert it into a formal application, and at that point I thought, yes I would.”

That idea turned out quite well.

“Every artistic adventure involves risk,” she says as she looks to the future of the venue.

“I take great courage in the fact they’ve taken an enormous risk by putting an actor in this position. I think that smacks of bravery, and it gives me great hope.”