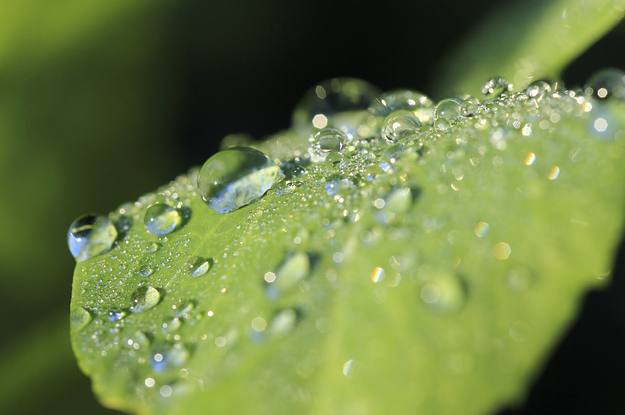 New slow motion video shows particles being released into the air as a raindrop hits the ground.

Its called petrichor. The word was coined by scientists in the 1960s and the smell itself is a mixture of compounds. One of those compounds is called geosmin and is given off by bacteria in soil, adding an earthy smell (its also found in beetroot). Other smells come from plant or animal matter that has accumulated in the ground.

2. When rain hits the ground, these compounds are disturbed and released into the air.

Scientists knew that these compounds were being released from the soil somehow. But it’s only now scientists from MIT have recorded high-speed video of it happening that they think they know how it works.

3. This video shows the process in more detail.

4. When a raindrop hits a porous surface it traps tiny air bubbles that are then released as aerosols.

Aerosols are particles suspended in a gas, like those that come out of a spray can. If you look closely you can see it happening here.

5. The scientists also managed to successfully predict how many aerosols would be released by each drop.

Cullen Buie and Youngsoo Joung conducted 600 experiments on 28 different surfaces. If they knew the speed of the drop, as well as the type of surface it would land on, they could predict how many particles would be released. They found that light and moderate rain release more aerosols than heavy rain does.

6. On the scientists from the 1960s that coined the word “petrichor”, Buie said in a press release:

They talked about oils emitted by plants, and certain chemicals from bacteria, that lead to this smell you get after a rain following a long dry spell. Interestingly, they don’t discuss the mechanism for how that smell gets into the air. One hypothesis we have is that that smell comes from this mechanism we’ve discovered.

The research was published in Nature Communications.