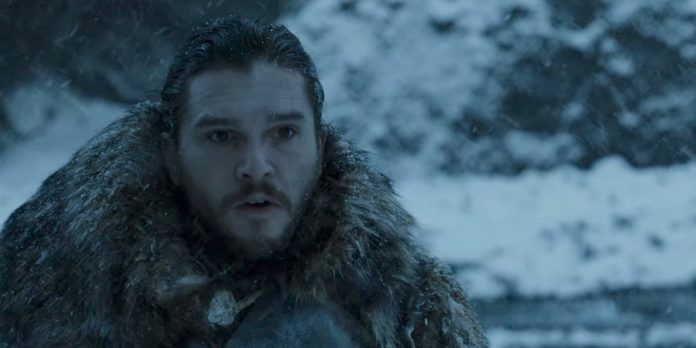 Warning: This article contains spoilers for Game of Thrones season 7.

Despite everyone with a shred of sense telling him it was a bad idea, Jon Snow is heading beyond the Wall to get his hands on a wight to prove the threat of the dead are real. He’s got a ragtag group of fighters with him—Ser Jorah Mormont, Gendry, Sandor Clegane (aka the Hound), Beric Dondarrion, Thoros of Myr, and Tormund Giantsbane among them—and the last time we see them they’re leaving Eastwatch-by-the-Sea to head far north.

And based on the preview for next week’s episode of Game of Thrones, they’re going to meet the dead. Plenty of them.

“Death is the enemy,” Beric tells Jon. “The first enemy and the last. The enemy always wins. And we still need to fight him.”

It’ll be the third big battle we’ll get this season after Euron Greyjoy’s attack at sea and Daenerys Targaryen’s fiery attack on land, and chances are not everyone will make it out alive. We’re only seeing part of the picture, and even though we won’t know how it’ll play out until next week, we can still find some hidden details.

5 important details from the Game of Thrones season 7, episode 6 trailer

In the season 7 premiere, the Hound—who is traveling with the Brotherhood Without Banners, looked into the flames at the request of Thoros of Myr. At first all he saw was a bunch of fire, but soon the flames showed him more. Much more.

“Ice. A wall of ice. The Wall,” the Hound said. “Where the Wall meets the sea. There’s a mountain. Looks like an arrowhead. The dead are marching past. Thousands of them.”

His vision appeared to direct the Brotherhood Without Banners to Eastwatch-by-the-Sea, which they nearly reached before being detained by Tormund and the other wildlings stationed there. But now we’re finally getting a glimpse of what looks to be the arrowhead-like mountain that the Hound originally saw in the flames.

2. Even more tension at Winterfell

Arya Stark has now seen the letter Sansa wrote to Robb in season 1 calling Ned Stark a traitor. Although Sansa did write it, it’s really Cersei’s words—and Cersei’s plan—to get Robb to King’s Landing. Of course Arya doesn’t know any of this, so after she reads it, she’s likely left even more suspicious of Sansa, who was tempted by an offer of the North from her lords. (She said no because Jon is still king.)

The preview suggests that we might see the two Stark sisters come to a head. Arya paces around Sansa while she looks on at her younger sister with fear.

“You’re scared, aren’t you?” Arya says in the trailer, though the dialogue isn’t connected to this particular scene. “What are you scared of?”

Will Arya make her move on Sansa? Or can they finally come to a place of understanding and stick together as a wolf pack?

After five episodes, we finally get the shot we’ve been waiting for ever since we saw it in the trailers: Beric Dondarrion with his flaming sword. (Last seen in season 3 during his fight with the Hound.)

Beric’s always had a flaming sword and a red priest at his side, but this time Thoros is heading north with the man who might be The Prince That Was Promised, or Azor Ahai. Granted, the Prince doesn’t necessarily need a flaming sword to take up the Azor Ahai mantle, but it would be really cool if Thoros could also give Jon a flaming sword.

4. Will the survivors come stumbling in?

Toward the end of the preview, we catch a glimpse of five men running toward the Wall’s gates with torches in hand. The clip is brief, but it doesn’t look as though they’re running toward a fight.

You can also see the figure in the middle doesn’t have much hair on his head while the others do. That central man running could very well be Ser Davos Seaworth, who Jon smartly left at Eastwatch-by-the-Sea. And as he said multiple times this episode, Davos is not a fighter.

We caught our first glimpse of the Night King in “Eastwatch” after Bran Stark’s ravens spotted him, but now he enters the arena proper. It’s unclear how many of our heroes will fall at his hand (or his command), but he’s ready to take them on.

The fight is almost guaranteed death, but it looks as though they’ve got a plan. They’re going to stand with their backs facing one another as death surrounds them. If they go, they’ll go, but at least they know they won’t be stabbed in the back along the way.

And while they don’t interact, we bet the Night King remembers the man who killed one of his own with a sword at Hardhome.

The next episode of Game of Thrones airs Sunday, Aug. 20 at 9pm ET.