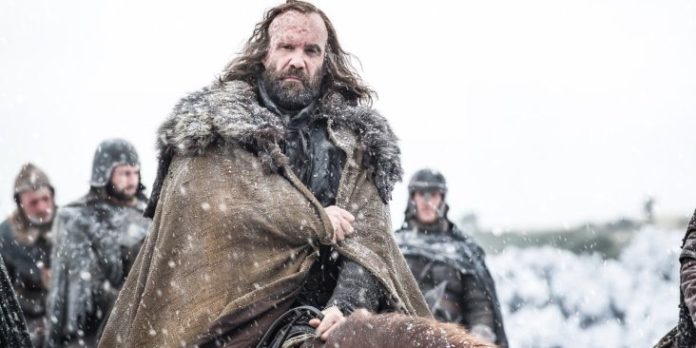 Sandor Clegane, aka The Hound, is a fan favorite for fans. This badass warrior with a softer side had been through a lot since we first met him in Season 1. He’s fallen in love with Sansa Stark, though he had an actual relationship with Arya Stark. Hewas left for dead, only to miraculously get better, and last season we saw him rejoin the fight.

Will The Hound go to Winterfellto see Sansa? Will he travel to King’s Landing and face his brother (The Undead Mountain That Shuffles) and fulfilllong awaited fan hopes for Cleganebowl?

Let’s run down where The Hound has goneover the seasons and how his walkabouts led him to the place he is today.

When we first met The Hound, he was part of the Kingsguard. He was a terrifying-looking, disfigured heavy hired by Cersei to do Joffrey’s dirty work. And do the dirty work he did, including killing Arya’s friend Mycah, a harmless butcher’s boy, on the princeling’s orders.

Fans have been clamoring for The Hound versus his horrific older brother, The Mountain, ever since the show first teased such a battle in Season 1. During the Hand’s Tourney in King’s Landing, The Hound showed himself to have an inner soft streak when he saved Loras Tyrell from The Mountain’s wrath after Loras unhorses him.

Their fight at the time was cut short by Robert. Next time, no one will intervene.

The Hound’s soft underbelly was exposed again when he fell in love with Sansa Stark. She was a prisoner of the Lannisters in King’s Landing after her father died, trappedin an engagement to Joffrey, who was increasingly showing signs of being an unhinged monster. When Sansa is caught by the crowds during a riot, The Hound is the one who saves her from being raped. When Joffrey orders her beaten, The Hound refuses to lift a finger to hurt her.

And when The Hound decides to leave King’s Landing instead of working for Joffrey anymore, he offers to help Sansa escape her prison. Tragically for him, she refuses.

And thus, a meme was born.

Also, The Hound is, from that point on, a wanted man with a price on his head. Just so we’re clear.

Season 3: On Trial For Mycah’s Death

Just as The Hound thought he had seen the last of those he knew in King’s Landing, a chance encounter with the Brotherhood Without Banners had him meet up with Arya Stark. She never forgave him for killing Mycah. Her accusations of murder resulted in themputting The Hound on trial, where he fights Beric Dondarrion in trial by combat.

The Hound wins, showing the gods think him innocent. But Beric springs back to life, because that’s his whole schtick. Let’s call it a draw.

Arya became disillusioned with the Brotherhood after they allowed Melisandre to take Gendry away, so she bounced. The Hound bounced after her, figuring the Starks would pay good money to have her back, and wouldn’t be interested in turning him back over to the Lannisters.

Arya was lucky. When they arrived at the Freys to hand her back to her family, it was just as the Red Wedding was commencing. The Hound got them both out of there and saved her life when he realized what was going down.

Season 4: On The Road

Season 4 saw Arya and The Hound on a long road trip together. Though The Hound might have fallen in love with her sister, it was Arya who he formed a mentoring relationship with, teaching her how to kill for chicken, how to leave men for dead and take their money, and how to stay low when the road got rough.

He taught her a little too well.

After reaching the Eyrie, only to learn Lysa was dead (and not going inside where they would have found Sansa instead), the two took off to head north for the Wall. But then Brienne ran into them, and tried to take Arya, following some sort of misguided honor code to her dead mother. Arya wasn’t having it, and neither was The Hound, who fought Brienne to the death to protect Arya from people like that.

And by the death, we mean his own. Arya left him to die, taking his money, just as he taught her.

Season 6:Brother Ray and The Hound

But the Hound didn’t die! (He doesn’t die in the books either, but it’s much less obvious he’s alive and not some weird zombie.) Instead, we run into him again halfway through Season 6, starring in this odd little new HBO peacenik series called Brother Ray and The Hound.

Lucky for everyone, it was canceled before the first episode finished, and The Hound grabbed his ax, and went back to our regularly scheduled programming.

Season 6: On The Road Again

Our last glimpse of The Hound in Season 6 came when he ran back into the Brotherhood, who accepted him back into their plotline with open arms and no questions asked. Beric and Thoros of Myr had plans to head north, where the war was coming.

The Hound shrugged. Might as well. Didn’t have anything else planned.

Where will The Hound and the Brotherhood wind up this season? Will they stop off at Winterfell and will The Hound reunite with Sansa? Will they make it to the Wall? Will they run into Melisandre headed south, or Arya coming in from the west? So many tantalizing possibilities.