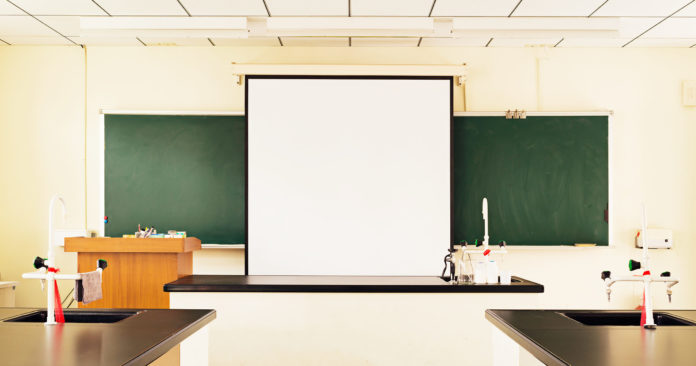 It’s about time that I added to my list of science communication rules. Previously, I described Rule 1: “You can’t be 100 percent correct, but you can be 100 percent wrong.” But clearly there is more to communicating science than this—it has to be about more than just not being wrong.

Now, I have my next science communication rule to give you something more to think about as you make your video or blog post or even a lecture or seminar. Before stating my rule, let me point out that in my previous post, I called it a Scientific Writing Rule—but here, I’m changing this to just general communication.

Scientific Communication Rule 2: You need to build a bridge—a content bridge. This bridge should connect some event or phenomena to an audience. The job of the communicator is to build the best (most appropriate) bridge.

How about an example? Take the Olympics as the event—and in particular let’s say that we want to talk about Simone Biles and how awesome she is at gymnastics. The task for a science communicator is to pick the type of content bridge to build that matches your audience. That audience could be scientists, or middle school students, or the general public. 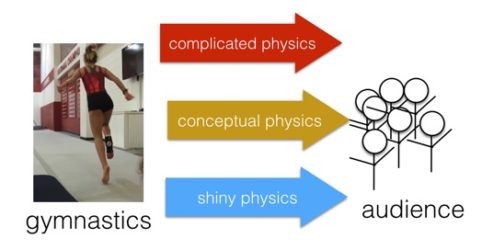 In gymnastics, athletes both flip and twist. How do you explain this? Of course you could choose to go all out and do full force physics on a problem like this. You could talk about angular momentum and the moment of inertia tensor. You could even start off with something like this:

This is the full relationship between the angular velocity vector and the angular momentum vector. Even this approach makes some assumptions about a rigid object (else the moment of inertia will not be constant). A bridge at this height probably won’t reach a very large audience—but that doesn’t mean you shouldn’t do it, depending on your goal.

At a slightly lower level, you could have a nice discussion about these same moment of inertia ideas, but leave off the complicated math. Here is a great example of that from Quartz including some robot gymnastics. I also like my own visually-based explanation (but it’s not as thorough) of twisting and flipping.

But perhaps you want a slightly lower bridge. Maybe you just want to talk about projectile motion for a gymnast in the air. Or it could be something about rotational speed for different body positions. However, there is a problem. You still have to remember the first rule of science communication—you don’t want to get into stuff that is absolutely wrong. This would be like a bridge that only connects to the audience and the other end is just floating off into space.

Unfortunately, there is also a bridge that is even lower. It’s so low that this bridge could be underwater. I’m not going to use specific examples, but just try searching for “gymnastics physics” and evaluate what you find. Some of the biggest offenders are the videos—mostly because it’s really difficult to get a good point into just a three minute video. But some of these videos aren’t exactly wrong—they just don’t really relate to the content. Here is a partially fictional example.

“Simone Biles is incredible and it has to do with kinetic energy. Kinetic energy is the quantity an object has when it is moving. Oh, here’s a cool diagram showing someone flipping.”

Seriously, some of the Olympic stuff out there is just random stuff like that. These science communicators are building an underwater bridge. And yes, I have made these same kinds of mistakes—that’s how I know you can really take a wrong turn in these cases. It can be quite a challenge to take an event and find one of these content bridges that is accessible to a large audience (but the challenge is what makes it interesting).

Just for fun, let me share one more Olympic bridge example. Here is a quote from one of my “favorite” science shows (you can probably guess which one). They were talking about how awesome it is that a particular archer can shoot with such high accuracy, along with some other stuff. It went something like this:

“With each shot, this dude pulls the string of the bow back with a force of 50 pounds. Over the course of an event, the dude could shoot over 100 arrows for a cumulative force of 2 and a half tons!”

This is pretty close to being 100 percent wrong. Yes, the calculation is correct but the result is meaningless. It doesn’t really illustrate an impressive feat, it’s just a series of numbers. I could do something similar for myself.

“As Rhett climbs a set of stairs, he has to push with a force equal to his weight—approximately 160 pounds! If he climbs 10 floors a day, that is a cumulative force of OVER 7.9 TONS!”