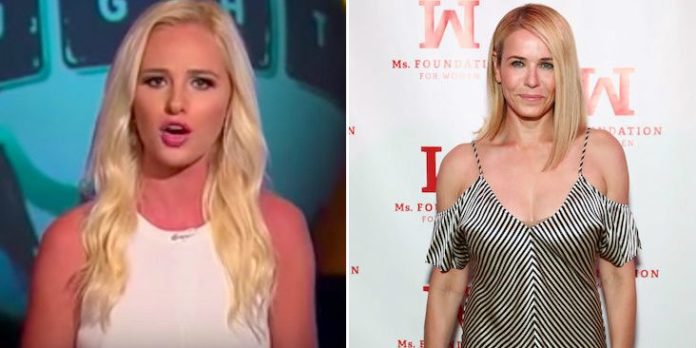 Tomi Lahren and Chelsea Handler are set to debate on Saturday, July 29. There’s been a lot of anticipation surrounding the Lahren-Handler debate, given their views on politics couldn’t be more different. One issue they don’t see eye-to-eye on in particular happens to be a topic that’s consumed the media cycle in recent months: health care.

If you’re not familiar with Lahren, she’s a conservative political commentator who frequently goes on rants about how awful liberals are.

Lahren still thinks socialism is a dirty word, which should give you a pretty good idea of where she stands on health care. She’s vehemently against a single-payer system, or universal health care.

The United States is the only industrialized country that doesn’t have universal health care.

According to Pew Research Center, a majority of Americans (60 percent) believe it’s the federal government’s responsibility toensure every single American has health care coverage, and 33 percent support a single-payer approach to health care.

But Lahren is still not on board. She despises the notion of government-run health care, which she’s referred to as a nightmare.

Hey Bernard, it’s not free if your neighbor pays for it. Socialism at its finest.https://t.co/HgcxKdP2Qz

Nowhere in the Constitution does it say, taxpayers shall pay for other people’s healthcare. Just saying. #healthcare

Someone should probablyinform Lahren that Medicaid, the federal health care program for the poor, covers roughly20 percent of all Americans 74 million people. Without it, many of these people’s lives would be at risk.

Lahren has expressed support for such plans, in spite of their unpopularityand the GOP’s failure to push them through Congress.

So your panties are in a bunch over the new healthcare bill? I have some final thoughtshttps://t.co/MXgwNfZ03q

These rep senators putting together a healthcare bill to revoke the rights of women would set us back 50 years. Call your reps. Men help too

What’s happening with health care is appalling. Stand up and use your voice. Call your reps. Stand up

So, no one knows about health care bill except the group of white men who crafted it and are keeping it a secret. Great country. Go USA

Handler, who’s a comedian and television host, has been criticized for being so vocal about politics. But she clearly feels that she has an obligation to speak out, especially on health care, given she views herself as very privileged, according to what she told HelloGiggles in an interview published on July 26.

Handler expressed similar sentiments in anInstagram post back in February, in which she said,

But I know this country is based on inclusiveness, on welcoming people, on loving people that are not like you

It’s compassion and it’s empathy. And I will fight for it.

The health care plans Republicans have pushed for in recent months would defund Planned Parenthood, which Handler is clearly opposed to, and would generally be awful for women’s health, especially given the majority of Medicaid beneficiaries are women.

During her interview with HelloGiggles, Handler said her discussion would be more of an interview than a debate.

But, given both Lahren and Handler are known for unapologetically voicing their opinions, and they disagree so strongly on an array of issues, it will be interesting to see what happens.