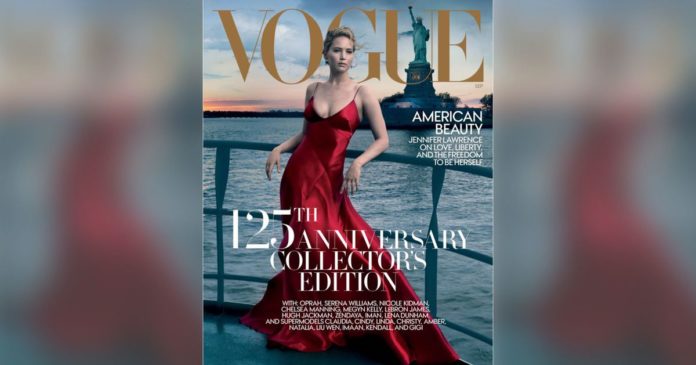 After filming particularly harrowing scenes from the upcoming psychological thriller Mother!, Jennifer Lawrence would take a break to retreat to her off-set “happy place:” A tent plastered with photos of the Kardashians.

As Lawrence revealed in her Vogue September issue cover profile, the film crew built a Kardashian-themed escape for the actress to preserve her “well-being” throughout a challenging shoot.

Wanting to protect Lawrence’s well-being amid that darkness, some of the Mother! crew assembled a “Kardashian tent” for the actress off seta refuge where she could get away from the work and decompress with her chatty friends from reality TV. “It was a tent that had pictures of the Kardashians and Keeping Up with the Kardashians playing on a loopand gumballs,” Lawrence says. “My happy place.”

One notable crew member not involved in the building of a Kardashian tent: Mother! director (and Lawrence’s boyfriend) Darren Aronofsky.

“I wasnt involved in that,” says Aronofsky. “I was like, ‘What are you talking about, ‘the Kardashians?’ “

According to Lawrence, he also doesn’t have much patience for the star’s happy place.

He just finds it so vastly disappointing, she told Vogue.

Clearly Aronofsky missed this 2015 photo of his now-girlfriend tangled up with Kardashian matriarch Kris Jenner:

Happy Birthday you piece of shit… God I love you #Jenniferlawrence thanks for making this night a night to remember…..even if we did get caught… I love you Happy Birthday Gorgeous!!! #Bible #momager #doll. Photo cred @coreygamble

Vogue’s profile is, of course, about more than just Lawrence’s love for delightfully trashy television. It also touches on her latest efforts as a board member with Represent.Us, a not-for-profit that seeks to pass anti-corruption laws regarding politics and the U.S. election system.

There are conservative as well as liberal voices in the organization, which Lawrence likes. “If youre a Republican, if youre liberal, it doesnt matter,” she says. The goal is “getting money and corruption out of politics” and “freeing our democracy.”

Lawrence is no fan of the current Trump administration, but “there needs to be a bridge,” she says. “We cant continue this divide and anger. There are issues affecting us as human beings, not as liberals and not as Republicans. We have to protect the foundation of this country, and acceptance. If youre preaching acceptance, accept immigrants, accept Muslims, accept everybody.”

In the past, Lawrence has made clear her distaste for President Donald Trump. Just days after the 2016 election, the actress penned an essay for Broadly urging readers to stay motivated.

She wrote: “Do not let this defeat youlet this enrage you!”

WATCH: 7 Hunger Games facts that will change the way you see the film