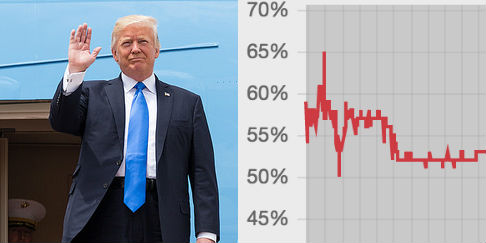 What are the odds that President Donald Trump faces impeachment?

This question, once seen as a rabid liberal fantasy, has percolated into the realm of relative possibility amid a cacophony of scandals that have bombarded the Trump White House over the past two weeks.

Rep. Al Green (D-Texas) became the first member of Congress to call for Trump’s impeachment on the House floor on May 17. And even some Republicans, including Rep.Carlos Curbelowho faces re-election in a blue district in 2018have entertained the possibility of a Trump impeachment.

Let’s be clear: Impeaching Trump remains a distant possibility, and booting him out of office is even less likely. Doing so would require the Republican-controlled House of Representatives to bring impeachment against him, and the Republican-controlled Senate to conduct an investigation into allegations against himand a two-thirds vote in the Senate to find him guilty.

Despite the low probability of a Trump impeachment, the chances are rising on political betting markets. Unlike polls, these markets are based on the predictions of people who have real money in the game, whichmay make them more accurate than any single poll.

Below, we’ve compiled a list of the odds bettors put on Trump either being impeached or leaving office before the end of his term in 2020.

As of Monday afternoon, Betfair usersput the odds of Trump leaving office before the end of his first term at about 50/50 (49.7 percent), with the slightest edge on him serving a complete term.

Betfair odds put Trump’s chances of leave office in 2017 at just over 20 percent, and the odds of him remaining in the White House through 2018 are down to 18.5 percent, as of Monday afternoon.

The Predictitquestion specifically questions whether Trump will be impeachednot whether he will leave office early. On the impeachment issue, Predictit users put the odds at about 20 percent, give or take. That number has held steady for roughly the past week.

Predictit users give Trump a 74 percent chance of remaining in office through the end of 2017, but that number drops to 60 percent for 2018.

These numbers may seem higha 50 percent chance Trump leaves office early, really?and, according to some data experts, they likely are.David Rothschild, an economist with Microsoft Research, tracks Trump’s chances of leaving office early at his site, PredictWise. The site tracks betting markets like Betfair and Predictit to give an aggregate look at the data, which he says is not great.

Still, Rothschild’s numbers show Trump’s chancesof remaining in the White House through 2020 falling precipitously over the past two weeks to their lowest point since he took office on Jan. 20. In the days since, they’ve evened out to roughly 50 percent.

In a new deep dive thought experiment into Trump’s chance of impeachment, FiveThirtyEight’s Nate Silver says any odds of 50 percent or lower are good news for Trump. But if they hit 75 percent, then it’s time to start wondering about the future of America’s commander-in-chief.

Of course, all the numbers above will fluctuate as the Trump presidency progresses, for better or worse. And that’s especially true if the Democrats trounce Republicans in the 2018 midterm election. If that happens, the smart money may be a bet against Trump. Of course, that line of thinking has failed before.