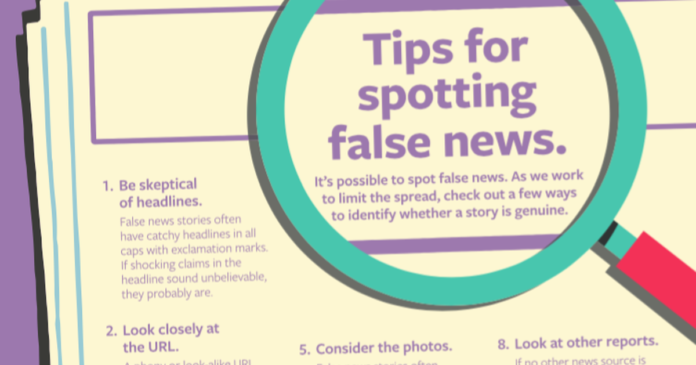 Facebook wants you to know that it’s still fighting fake news, even across the pond.

SEE ALSO: A UK politician just became editor of a newspaper and Twitter is flipping out

Ahead of the June 8 parliamentary elections in Britain, Facebook has launched a newspaper ad campaign with 10 tips on how to spot false news.

The full-page print ads has appeared on selected dailies, including the Telegraph, Times, Metro and Guardian, replicating an educational notice, announced in April, that would appear on top of everyone’s news feed in the UK.

People want to see accurate information on Facebook and so do we. That is why we are doing everything we can to tackle the problem of false news,” Simon Milner, Facebook’s Director of Policy for the UK, said.

“We have developed new ways to identify and remove fake accounts that might be spreading false news so that we get to the root of the problem.”

Similar ads have been placed in Germany and France last month ahead of their elections.

Facebook also said it removed “tens of thousands of fake accounts” since it announced in April a new drive to identify and remove fake accounts.

The social network claimed it made improvements to detect fake accounts by identifying patterns of activity without assessing the content itself.

For example, Facebook said its systems may detect repeated posting of the same content or an increase in messages sent.

“With these changes, we expect we will also reduce the spread of material generated through inauthentic activity, including spam, misinformation, or other deceptive content that is often shared by creators of fake accounts,” Facebook said.

The company is partnering with UK fact-checking charity Full Fact and nonprofit First Draft to address rumours and misinformation spreading online during the UK general election.

“We can’t solve this problem alone so we are supporting third party fact checkers during the election in their work with news organisations, so they can independently assess facts and stories,” Milner said.