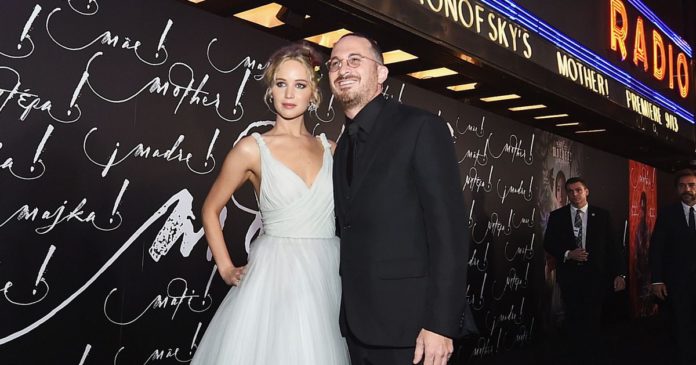 Jennifer Lawrence and Darren Aronofsky look awfully cheerful for two people who are about to mess you up.
Image: Getty Images / Paramount Pictures

Reactions to Jennifer Lawrence’s new movie, mother!, seem to be all over the map, and no one quite seems to know what it’s even about.

But there’s one thing everyone seems to agree on, and it’s that this film is bananas.

SEE ALSO: Jennifer Lawrence’s ‘mother!’ is designed to get people talking, that’s for sure

No, seriously. It’s so off-the-wall bonkers that even Lawrence, speaking at the film’s New York premiere, admitted that she was “shaken” the first time she saw it:

My first reaction was that we took it too far. But then after the images died down a little bit, [the movie’s] exactly what we’re supposed to be doing and what we need to be doing. We have a message and if we watered it down to make people comfortable then what’s the point? Why even make it?

mother! stars Lawrence and Javier Bardem as a couple whose tranquil lives are disrupted by the arrival of some unexpected visitors (played by Ed Harris and Michelle Pfeiffer).

From there, it rapidly spirals into … well, you’ll see. It’s an experience best enjoyed without spoilers, so we’ll leave it at that for now.

Darren Aronofsky, who wrote and directed the film, seems to know just how bizarre his latest work is. He prefaced the screening with a jokey apology, warning, “You’re all going to really hate me in about an hour and a half.”

And that’s saying a lot, seeing as his previous work includes the nightmarish Requiem for a Dream and the feverish Black Swan.

If you go this weekend, then, don’t say you weren’t warned.

WATCH: 7 ’Hunger Games’ facts that will change the way you see the film