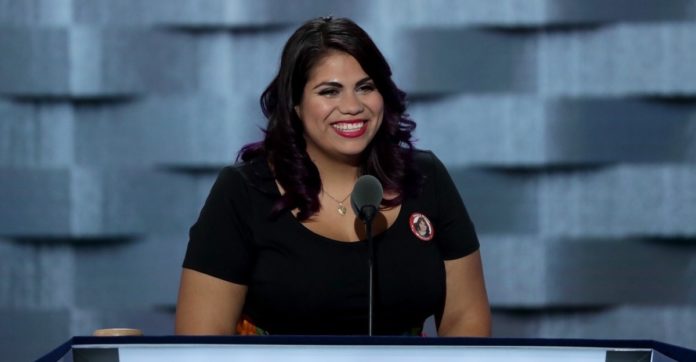 In President Donald Trump’s first address to a joint conference of Congress, he doubled down on many of his hard-line promises on immigration.

In the hourlong address, the president discussed the creation of a southern margin wall and boasted about his administration’s revved-up approach to deporting undocumented immigrants. He unveiled plans for a new Victims of Immigration Crime Engagement( VOICE) office and brought with him as guests people who lost family members to violence committed by undocumented immigrants.

Though many have praised Trump’s more presidential tone of voice, the policies laid out in his speech are the same ones he’s touted since the start of his campaign. As Bloomberg’s Joshua Green reported, a senior White House official described Trump’s speech as “nationalism with an indoor voice.”

It’s Trump’s harsh and demonizing posture on immigration that induced Astrid Silva’s Spanish-language response to Trump’s address delivered on behalf of the members of the Democratic party so important.

Silva was brought to the United States at age 4. A recipient of President Barack Obama’s Deferred Action for Childhood Arrivals( DACA) executive ordering that allows undocumented immigrants who went to the U.S. at a young age to stay as long as they meet certain criteria, Silva’s own immigration status remains up in the air under Trump. She, like more than 750,000 other DACA recipients, faces an uncertain future that includes the possibility of being deported back to a country she’s never known.

On Tuesday night, Silva pushed back on Trump’s rhetoric, constructing the occurrence for immigrants like herself:

1. We can’t let Trump divide us with incendiary language .

“The United States is not a number of countries guided by hatred, anxiety and division as[ Trump] constructs it look like, ” Silva argued in a version of her speech translated to English by the The Washington Post. “Our country is guided by respect, hard work, sacrifice, opportunities and hope. In this country, there is no place for discrimination, racial prejudice or persecution.”

Silva called Trump’s speech “divisive, ” telling, “its goal is to cause fear and terror in communities across the country, ” and she argues that those goals are at odds with American values.

2. Nor should we be investing billions of dollars constructing walls and funding expulsion forces .

“He is investing the necessary resources for transform operating families into targets for expulsion, ” said Silva. “He am willing to spend thousands of millions of dollars to build an unnecessary wall. And he is seeking ways to deny entry to our Muslim brothers and sisters.”

In February, Reuters reported that Trump’s border wall will cost an estimated $21.6 billion. Trump likewise promised to hire 10,000 additional Immigration and Customs Enforcement( ICE) officers and 5,000 Border Patrol agents. The reality remains, nonetheless, that the number of people trying to cross the U.S. margin illegally is at a near-4 0-year low. Putting resources into ICE, Border Patrol, and an expensive wall seems unwarranted.

3. The answer to undocumented immigration which is an issue that needs to be addressed is comprehensive immigration reform , not mass deportations .

4. We need to take action on climate change for the sake of “the worlds” .

“We Latinos suffer from asthma more than other groups. The condition of the environment is key for our well-being. Instead of repealing the health care law, which made health insurance of thousands of Latinos, Trump and the Republican should improve it so that the program can embrace more people and be less expensive.”

Whether you’re in the U.S. or anywhere else on Earth, climate change will affect us all. That’s why no matter Trump’s action on immigration, it’s important that he does something about climate change, something he’s previously called a “hoax.”

5. And ultimately, Silva reiterated, we need to stand up for each other, even when issues don’t directly affect us .

“We are living in times of uncertainty, altogether outside of the ordinary, in which the administration is constantly questioning the news media and actively tries to destroy its credibility, ” said Silva. “We cant let those actions to become normal. It demands that those of us who understand the risk for women, for the LGBT community, for our environment, for the workers, immigrants, youths and refugees, work together to protect our communities from deportations, violence and discrimination.”

It’s on all of us to side with undocumented immigrants to push for a path to citizenship, to supporting LGBTQ rights, to combat racism, to fight Islamophobia and anti-Semitism, to ensure access to health care, and to protect our social safety nets. We need to show up for one another.

Immigrants build America great. Silva is living proof of that.

“We immigrants and refugees are the soul and the promise of this country and we are not alone, ” she said.

You can watch her reaction below in Spanish or read the English translation here .