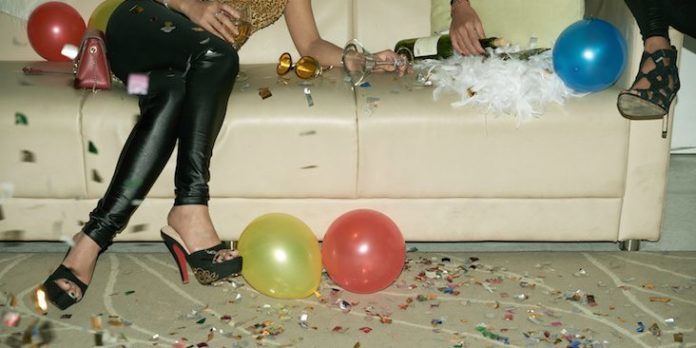 College itself is a time unlike any other, but things will really start to get crazy when it’s time to let loose. Frat parties are a college classic that you have to try at least once if you want the full university experience. Sowhat happens at afrat party? Chances are, your first experience at one will leave you excited, confused, and maybe a little concerned, but you’ll learn something from all of it. I promise, these lessons you’ll learn will be nothing like the ones you pay tuition for. They’ll be much more interesting. Plus, they’ll come in handy at some point in your life, even if it’s just at another party.

You’ll have the time of your life getting to know a bunch of sweaty strangers in a tiny house, so don’t be scared. It’s best to test the waters with a few good friends, and to be safe you’ll want to leave with them too. Here are just a few of the inevitable life lessons you’ll take in at your very first frat party.

1. Peeing With A Friend

For a girl in a nice outfit, it’s not always a quick process to excuse yourself to the restroom at a party. Now factor in the facts that you probably don’t know where the bathroom is, there will most likely be a line, and you’re not sober. Peeing can easily become a two-person task, so pick your bathroom buddy wisely.

Don’t take your sweet time, either, because a drunk stranger could be projectile vomiting on your lap if you can’t get off the toilet in time. Sorry to paint that picture for you

Unless you’re BFFs with a frat brother, it’s a safe bet that you’ve never stepped foot into the house until now. Make a mental map as you go, because your surroundings probably won’t look the same by the time you’re four shots in and in a crowd of people on the dance floor. Take note of the important placeslike the bathrooms and the door while you’re still sober. You’ll thank yourself later.

3. There Will Be Messes

You’ll stick out like a porcupine in a nudist colony if you show up to a frat party like you’re going to your high school homecoming. Smart girls wear something cute, comfy, and cheap. It’s inevitable that some unidentified liquid will get on you at some point in the night. You can just tell yourself it’s sweat and drunk you will totally buy it.

There’s nothing wrong with going upstairs, just know that what goes up must come down. It’s not overly easy or safe to navigate a dark stairway in an intoxicated state, so you’ll be smart to avoid that situation altogether.

If you do find yourself in need of descending some steps, find an escort or try your hand at crawling down on your butt. You’ll look pretty strange, but it’s a better entrance than falling down the stairs.

Whether or not it’s the kind of interaction you had in mind, there will be an intoxicated stranger dancing seductively on or near you at some point in the night. If you’re down to play along, be safe and have fun. If not, feel free to get creative with your rejection because they probably DGAF.

It’s a shame you may not remember your drunk conversations, because they’re some of the best you’ll ever have. When your inhibitions are down you’ll be more open-minded than ever, so get to know the others at the party.

Who knows, you might make a new friend or meet your soulmate over a rant about the best fast food french fries.

7. It’s Going To Be Awkward AF

Sorry, but it’s inevitable. Frat parties aren’t quite the same without the loud music, the people, and the alcohol, so try not to get there early if you want to avoid the weirdness.

The only thing more awk than a party before it starts is the morning after one; there’s nothing wrong with doing the walk of shame but it’ll get a lot more attention if you’re walking out of a frat house at 9 a.m.

You can try all you want but you’ll never look pretty doing a Jell-O shot. Neither will anyone else in the room, so go crazy. Use your tongue or your finger as a spoon if you need to, but don’t be that person who announces that they have no clue what their doing.

Blame it on the alcohol, but you’ll stop giving a damn about basically anything once the party gets going. You’ll be hot and sweaty, your makeup will run, and you may have just stepped in barf, but you’re having fun and that’s all that matters. You’ll have the night of your life just living in the moment, which is exactly what a party is all about.

10. Morning Gets Its Payback

You may go to bed as happy as ever been, but the morning is not likely to be so pleasant. Remember to stay hydrated and have some aspirin on hand. Rest up so you’ll be ready to do it all again.