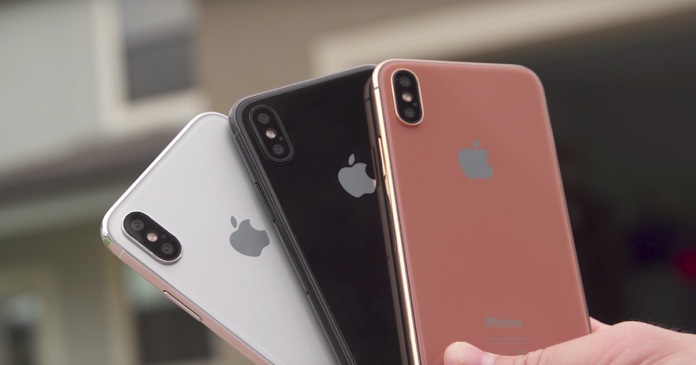 If you haven’t already marked your calendar for Sept. 12, go do it now because that’s when Apple will announce the completely redesigned iPhone 8 with edge-to-edge display and likely updates for the two existing iPhones.

For months, we’ve been lapping up every single leak and rumor that has spilled onto the internet. Whether they were from Foxconn, the Chinese factories that manufacture iPhones, or from Apple’s own HomePod firmware, we’ve seen a lot of credible evidence that paints a good picture of what to expect.

But if you haven’t kept up or need a refresher, here’s the top 10 things we feel really confident Apple will introduce for the iPhone 8 at the Steve Jobs Theater on Tuesday.

The most noticeable new feature for the iPhone 8 will be its display. Apple’s reportedly switching to OLED technology (the same kind used in Samsung’s phones) from LCD. The change will mean you’ll get more vibrant colors with greater dynamic range and deeper blacks, but also increased brightness and greater power efficiency since each pixel only lights up when it’s turned on (not black).

The screen is expected to measure 5.8-inches, corner-to-corner with rounded corners. Data extracted from the leaked HomePod firmware suggests it’ll have a 2,436 x 1,125 resolution, according to iOS developer Steven Troughton-Smith.

The iPhone has had a unibody aluminum design since the iPhone 5. But that’s all going to change with the iPhone 8, which will likely come with a polished stainless steel frame and hardened glass back.

Apple’s used this combination of materials before on the iPhone 4 and 4S, but there’s a big reason why it’s returning to them…

And that reason’s wireless charging. Glass is a better material for wireless signals to pass through, which is why phones with built-in wireless charging like the old Nexus 4 and all of Samsung’s recent Galaxy S8 and Note 8 phones have glass backs.

This’ll be the first time Apple’s include wireless charging in an iPhone. While early rumors claimed the iPhone 8 would have some kind of long distance wireless charging, it’s now believed Apple might go with the more common inductive Qi standard. (Apple joined the Wireless Power Consortium in February.)

A wireless charging pad probably won’t be included in the box and will be sold separately.

That edge-to-edge display means you’ll get a big screen in a smaller body, but it also means there won’t be any room for the iconic home button.

But that’s OK, because Apple’s going to make up for it with new input…

Without a home button, how will you be able to return to your home screen or open up the App Switcher? A report from Bloomberg’s reliable Mark Gurman has revealed Apple will use new gestures to replace the home button.

There will reportedly be a thin bar at the bottom of the iPhone 8’s display, which you’ll be able to swipe up to bring up the App Switcher. Keep swiping up and you’ll go back to the home screen, the report claims.

As for the current swipe-up gesture for bringing up Control Center — it could be replaced by a right swipe gesture or some other 3D Touch gesture.

Embedding a fingerprint sensor underneath the display has proven to be extremely challenging, not just for Apple, but for competitors like Samsung, who was forced to put the sensor on the back of the S8 and Note 8.

There’s also been rumors that Apple could put a fingerprint sensor within the iPhone 8’s power button, but there have been no leaks for such sensors thus far.

Replacing the Touch ID fingerprint sensor will most likely be some kind of advanced 3D face recognition, aided by either a new iris scanner or improved selfie camera.

According to the Korean Herald, the iPhone 8 will have a “facial recognition scanner with 3D sensors” that can detect faces in “millionths of a second” for unlocking the device. Similarly, TechCrunch says the face recognition, codenamed “Pearl ID”, could read your face even when the phone’s just sitting on your desk. In other words, the iPhone 8 could unlock with just a glance.

The new face recognition will also reportedly replace Touch ID as the method of authentication for Apple Pay.

We’re not sure how many colors the new iPhone 8 will come in, but we are pretty damn confident there will be at least one new color: a copper-bronze-pink that some think might be called “Blush Gold.“

YouTubers like Danny Winget have made extensive videos on dummy models of the new color. It’s unclear if the copper gold model will come with a white bezel. Winget has called it hideous.

Mashable found the same dummy model at IFA in Berlin, and while the copper gold and pink bezels don’t really match that well, the real thing could look different.

See that huge vertically-aligned camera bump with dual cameras on the back of the phone? Yeah, there’s definitely something going on there.

Each iPhone has brought some kind of leap in the cameras and the iPhone 8 will be no different. Whether it’s more megapixels or better low-light performance, there will be better cameras. Apple’s not going to let those 800 people who work on the camera go to waste this year.

All of these new features aren’t going to come cheap. Several reports — Fast Company, the New York Times, Daring Fireball, etc. — claim the iPhone 8 will cost around $999 for the entry-level model.

Prolific iPhone 8 leaker Benjamin Geskin has echoed those claims and recently said his sources have told him the pricing will be as follows:

Whether you’re ready or not for an iPhone that costs more than most laptops, it’s coming. So start saving up or get a loan.

Ready for a lightning round of other things we’re pretty sure the iPhone 8 will feature?

WATCH: This tiny electric skateboard is perfect for getting you around town