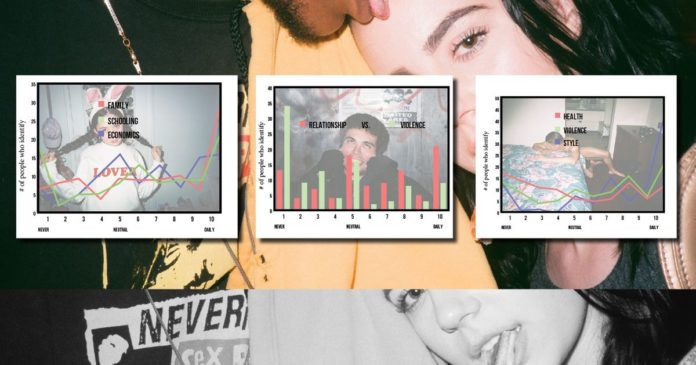 At a time when magazines are folding, one is being birthed.

VFILES, the New York-based Web portal, app and retail store with a user-base mostly composed of Generation Z, just announced it was launching its first-ever magazine.

The publication in question is aptly called, WOMB, one that delves into youth culture through the purveyors themselves. The entire magazine was crowdsourced from VFILES users and fans from vfiles.com.

“A womb is literally where we all came from, it’s the start, it’s a common denominator that everyone has,” Julie Anne Quay, VFILES founder, toldMashable.

Its first issue of the quarterly, composed of 104 pages is called, “We’ve Got Issues,” and has little to no editorial text. Rather, it’s composed of images from writers, stylists, photographers, makeup artists, hairstylists and models from the platform.

Quay says that it’s not because youth don’t like reading, just that the goal is more a visual publication and dialogue.

“Pictures say a thousand words,” she said. “We don’t want to put words in people’s mouths and what we think of this and that. Instead, their images are printed on beautiful, luxurious paper to celebrate their perspectives. It’s a really personal thing.”

WOMB comes with a handful of well-known figures within the downtown scene. They include co-founder and editor-in-chief Kevin Amato, influential social stars like Luka Sabbat as a curatorial director at large and singer CL and Will.I.Am as contributors. Calvin Klein was onboard to finance the endeavor.

“I wanted to create a project that focused on emerging and undiscovered talent,” said Amato to Mashable, who’s casting credentials range from Hood By Air to HBO and the VMAs, among others. “Young artists have limited support, limited resources and no money. [WOMB] isimportant because it’s the voice of our future. Gen Z is a bit more removed from real life shit, communicate more with hands than voice, yet they are way smarter, progressive, more educated and exposed to more than past generations.”

Instead of a lucrative endeavor (WOMB is free), Quay says it’s more a celebration of VFILES’ talented community. The same portal, after all, is where designers are discovered for the brand’s annual runway show in September. It’s also a way for older generations to understand the youths of today, Quay says.

“Youth culture is leading the world,” she said. “The older generation has no clue. To see how these kids are pushing culture forward is an inspiring thing. It’s a glimpse into their world from their perspectives.”

Before launch, Quay said VFILES sent out a survey to its 200,000 active users. It asked its youths about various topics including: health, identity, relationships, love, violence, style, hate, economics, among others.

“Media goes around and pretends life is one thing and another, it’s not honest,” Quay says. “This is raw and uncomfortable at times. But it’s really what these young people are thinking about.”

Amato said the magazine was all about freedom and providing the tools necessary to be creative.

Before the launch, Amato said he gave 50disposable cameras to VFILES users. They took their photos from their own vantage points and sent them in for submissions.

“Each artist and contributor is present in their work, not a spectator,” Amato said. “I hear people talk about the youth. ‘Do it for the youth.. blah blah buy my product.’ WOMB is the realest way to give the youth a voice, resources and exposure while respecting and recognizing all calibers of talent on an even playing field.

WOMB is now on newsstands and available on VFILES.com.